Don't Leave it on the Desk

by A Shared e-mail from Suzan
(WI USA)

There was a certain Professor of Religion named Dr. Christianson, a studious man who taught at a small college in the western United States . Dr. Christianson taught the required survey course in Christianity at this particular institution.  Every student was required to take this course their freshman year, regardless of his or her major.


Although Dr. Christianson tried hard to communicate the essence of the gospel in his class, he found that most of his students looked upon the course as nothing but required drudgery.  Despite his best efforts, most students refused to take Christianity seriously.


This year, Dr. Christianson had a special student named Steve.  Steve was only a freshman, but was studying with the intent of going onto seminary for the ministry.  Steve was popular, he was well liked, and he was an imposing physical specimen.  He was now the starting center on the school football team, and was the best student in the professor's class.


Friday came and Steve got to class early and sat in the front of the room. When class started, the professor pulled out a big box of donuts.  No, these weren't the normal kinds of donuts, they were the extra fancy BIG kind, with cream centers and frosting swirls.  Everyone was pretty excited it was
Friday, the last class of the day, and they were going to get an early start on the weekend with a party in Dr. Christianson's class.


When the professor asked, "Scott do you want a donut?" Scott's reply was, "Well, can I do my own push-ups?" Dr. Christianson said, "No, Steve has to do them." Then Scott said, "Well, I don't want one then." Dr.. Christianson shrugged and then turned to Steve and asked, "Steve, would you do ten push-ups so Scott can have a donut he doesn't want?"With perfect obedience Steve started to do ten push-ups.


Scott said, "HEY! I said I didn't want one!" Dr. Christianson said, "Look! This is my classroom, my class, my desks, and these are my donuts.  Just leave it on the desk if you don't want it."  And
he put a donut on Scott's desk.


Now by this time, Steve had begun to slow down a little.  He just stayed on the floor between sets because it took too much effort to be getting up and down.  You could start to see a little perspiration coming out around his brow.


By now, a growing sense of uneasiness filled the room.  The students were beginning to say, "No!" and there were all these uneaten donuts on the desks. Steve also had to really put forth a lot of extra effort to get these push-ups done for each donut.  There began to be a small pool of sweat on the floor beneath his face, his arms and brow were beginning to get red because of the physical effort involved.

Dr. Christianson asked Robert, who was the most vocal unbeliever in the class, to watch Steve do each push up to make sure he did the full ten push-ups in a set because he couldn't bear to watch all of Steve's work for all of those uneaten donuts.  He sent Robert over to where Steve was so Robert count the set and watch Steve closely.


Dr. Christianson started down the fourth row..  During his class, however, some students from other classes had wandered in and sat down on the steps along the radiators that ran down the sides of the room.  When the professor realized this, he did a quick count and saw that now there were 34 students
in the room.  He started to worry if Steve would be able to make it. Dr. Christianson went on to the next person and the next and the next.  Near the end of that row, Steve was really having a rough time.  He was taking a lot more time to complete each set.

Steve asked Dr. Christianson, "Do I have to make my nose touch on each one?" Dr. Christianson thought for a moment, "Well, they're your push-ups.  You are in charge now.  You can do them any way that you want."  And Dr. Christianson went on. A few moments later, Jason, a recent transfer student, came to the room and was about to come in when all the students yelled in one voice, "NO! Don't
come in! Stay out!"


Jason, do you want a donut?" Jason, new to the room, hardly knew what was going on.  "Yes," he said, "give me a donut." "Steve, will you do ten push-ups so that Jason can have a donut?" Steve did ten push-ups very slowly and with great effort. Jason, bewildered, was handed a donut and sat down.


Dr Christianson finished the fourth row, and then started on those visitors seated by the heaters.  Steve's arms were now shaking with each push-up in a struggle to lift himself against the force of gravity.  By this time sweat was profusely dropping off of his face, there was no sound except his heavy breathing; there was not a dry eye in the room.


The very last two students in the room were two young women, both cheerleaders, and very popular.  Dr. Christianson went to Linda, the second to last, and asked, "Linda, do you want a doughnut?" Linda said, very sadly, "No, thank you." Professor Christianson quietly asked, "Steve, would you do ten push-ups so that Linda can have a donut she doesn't want?"


Grunting from the effort, Steve did ten very slow push-ups for Linda. Then Dr. Christianson turned to the last girl, Susan.  "Susan, do you want a donut?" Susan, with tears flowing down her face, began to cry.  "Dr. Christianson, why can't I help him?"


Dr Christianson, with tears of his own, said, "No, Steve has to do it alone; I have given him this task and he is in charge of seeing that everyone has an opportunity for a donut whether they want it or not.  When I decided to have a party this last day of class, I looked at my grade book.  Steve here is the only student with a perfect grade.


Everyone else has failed a test, skipped class, or offered me inferior work.  Steve told me that in football practice, when a player messes up he must do push-ups. I told Steve that none of you could come to my party unless he paid the price by doing your push-ups.  He and I made a deal for your sakes."


"Steve, would you do ten push-ups so Susan can have a donut?" As Steve very slowly finished his last push-up, with the understanding that he had accomplished all that was required of him, having done 350 push-ups, his arms buckled beneath him and he fell to the floor.


Dr. Christianson turned to the room and said, "And so it was, that our Savior, Jesus Christ, on the cross, plead to the Father, 'Into thy hands I commend my spirit.'  With the understanding that He had done everything that was required of Him, He yielded up His life.  And like some of those in this room, many of us leave the gift on the desk, uneaten. "


Two students helped Steve up off the floor and to a seat, physically exhausted, but wearing a thin smile. "Well done, good and faithful servant," said the professor, adding, "Not all sermons are preached in words."


Turning to his class, the professor said, "My wish is that you might understand and fully comprehend all the riches of grace and mercy that have been given to you through the sacrifice of our Lord and Savior Jesus Christ. He spared not His Only Begotten Son, but gave Him up for us all, for the whole Church, now and forever.


Whether or not we choose to accept His gift to us, the price has been paid." "Wouldn't you be foolish and ungrateful to leave it lying on the desk?"


Share this with someone. It's bound to touch their heart and demonstrate Salvation in a very special way.

Join in and write your own page! It's easy to do. How? Simply click here to return to Inspirational Christian Stories. 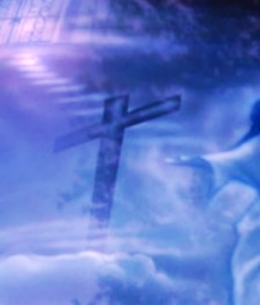